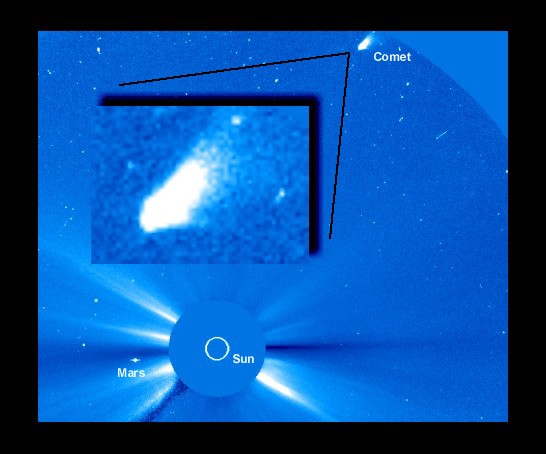 Explanation: Staring at the Sun from a vantage point in space (Kids, don't try this at home!), the Solar and Heliospheric Observatory (SOHO) has enabled the discovery of much about our closest star. It has also been used to discover about 50 comets. While not competing with Hale-Bopp, one of SOHO's recently discovered comets has proved to be bright enough to see with the unaided eye. The May 4th discovery image is shown above with an enlarged inset of the comet. This colorized image is from SOHO's solar coronagraph (LASCO) which views the region around the Sun by blocking out the overwhelming sunlight with an occulting disk. The disk is visible near the bottom left, with the Sun's size and position indicated by the white circle. Bright solar wind regions can also be seen along with the the planet Mars and a background of stars. The comet itself is just entering the field of view at the upper right. Observers report that Comet SOHO (1998 J1) has now been seen low in the western sky following sunset and is moving south and east becoming more visible as this month progresses, particularly from the Southern Hemisphere.