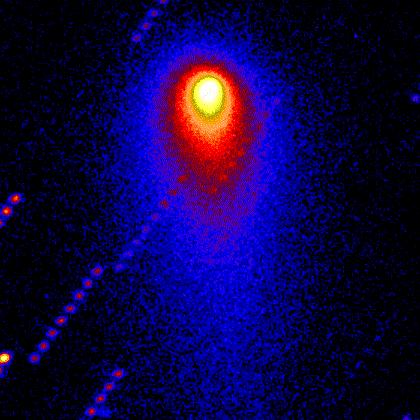 Explanation: Comets move against a field of background stars. Their apparent motion is slow but carefull tracking reveals their orbits, allowing these visitors to the inner solar system to be identified as old or new acquaintances. Recently a new comet, designated 1998 H1, was discovered by observer Patrick L. Stonehouse of Wolverine, Michigan, USA, and announced on April 26. At 10th magnitude, comet Stonehouse is too faint to be seen by the unaided eye, but it is presently a popular object for telescope-equipped comet watchers. This false color picture of comet Stonehouse was taken on May 1st at Limber Observatory and is a composite of 8 exposures each 60 seconds long. The sequence of exposures was made with the telescope following the background stars. The individual pictures were then aligned on the comet and added together. Because of the comet's relative motion, the combined multiple-exposure shows trails of progressively offset star images but nicely captures the comet's coma and faint, tenuous tail.