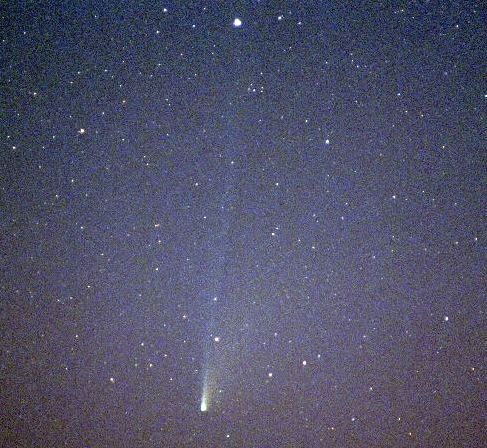 Explanation: Discovered this month with an orbiting solar observatory, bright Comet SOHO has now emerged from the Sun's glare. This telephoto picture of the new naked-eye comet was taken by astrophotographer Michael Horn after sunset in the western twilight above Lake Samsonvale, Brisbane, Australia on May 18. The comet is seen in the constellation Orion. Its long lovely tail stretches nearly 5 degrees to the bright star Bellatrix, near the top of the image. For Southern Hemisphere comet watchers, views of Comet SOHO (1998J1) will improve as this month draws to a close and the comet climbs to the south and east on its journey outward bound. In February 1999, NASA plans to launch the Stardust mission to fly close to a comet and return samples of dust from a comet's tail.