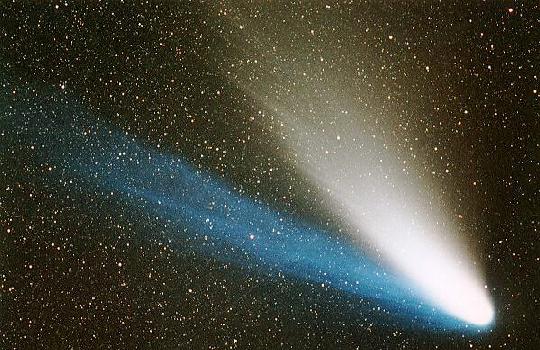 Explanation: Today marks the Vernal Equinox, the first day of Spring for planet Earth's northern hemisphere. Despite recent attempts by other spectacular and dramatic celestial events to take center stage, Comet Hale-Bopp remains the most popular object in the sky (according to APOD access logs!) and is likely to make this spring memorable for many. Gorgeous pictures of the comet with its delightful tails - this one taken March 16 - make this outbreak of "comet fever" understandable. Will the Earth pass through the lovely tails of Hale-Bopp? No, but the Earth has made similar journeys in the past. In fact, tales are often told of our planet's 1910 passage through comet Halley's tail. Anticipation of this event caused hysteria as it followed close on the heels of the spectroscopic detection of CN, poisonous cyanide, as a gaseous constituent of cometary tails. However, stretching for millions of miles, awe-inspiring comet tails are actually an extremely tenuous, nearly perfect vacuum and don't pose a danger to life on Earth.