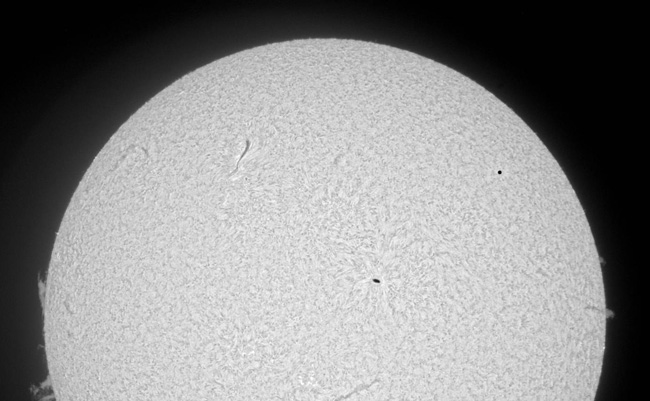 Explanation: How big is the Sun? The Sun is not only larger than any planet, it is larger than all of the planets put together. The Sun accounts for about 99.9 percent of all the mass in its Solar System. Merely stating the Sun's diameter is about 1,400,000 kilometers does not do it justice. Last week a chance to gain visual size perspective occurred when planet Mercury made a rare crossing in front to Sun. Mercury, a planet over a third of the diameter of our Earth, is the dark dot on the upper right. In comparison to the Sun, Mercury is so small it is initially hard to spot. Also visible on the Sun are dark circular sunspots, bright plages, and dark elongated prominences -- many of which are larger than Mercury. The above contrast-enhanced picture was captured last week from France.