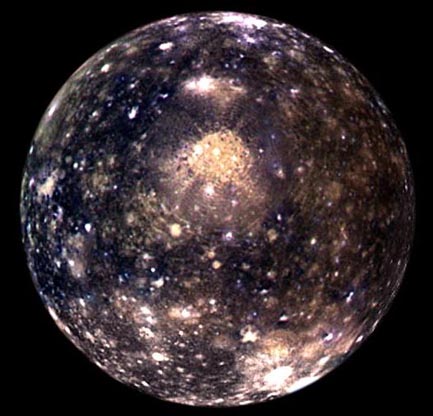 Explanation: Callisto is half rock and half ice. This moon of Jupiter is approximately the size of the planet Mercury, making it the third largest moon in the Solar System, after Ganymede and Titan. Callisto's icy surface is billions of years old, lacks any sign of volcanic activity, and is densely covered with rifts and craters. These features are particularly apparent in this contrast-enhanced image taken by the Galileo spacecraft, and released last week. Visible near the image center is Valhalla, one of the largest impact craters in the Solar System, measuring about 4,000 kilometers across. The rings and size of Valhalla make its appearance similar to the Caloris Impact Basin on Mercury.