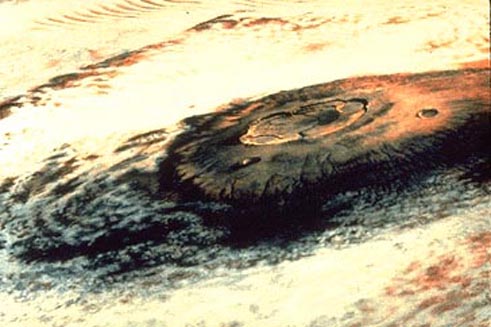 Explanation: The largest volcano in the Solar System is on Mars. Olympus Mons rises 24 kilometers high and measures 550 km across. By comparison, Earth's largest volcano, Mauna Loa in Hawaii, rises 9 km high and measures 120 km across. Such large volcanoes can exist on Mars because of the low gravity and lack of surface tectonic motion. Olympus Mons is a shield volcano, built by fluid lava. Over the next three years, Mars Global Surveyor, which arrived at Mars last week, will photograph the planet at such high resolution that objects only 100 meters across will be visible. The above image was taken by Mariner 9, which orbited and photographed Mars during 1971 and 1972.