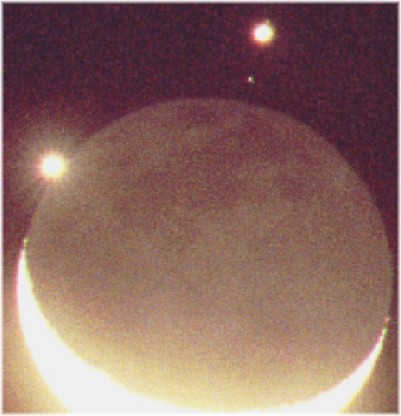 Explanation: On April 23, the rising crescent Moon occulted (passed in front of) Venus and Jupiter. The double occultation was a rare event and only visible from certain locations tracing a path across Earth's surface. This dramatic telephoto picture was taken at one such location, Ascension Island in the South Atlantic. The sunlit crescent is over-exposed revealing the rest of the lunar surface illuminated by faint earthshine. Venus is emerging just beyond the crescent's tip and Jupiter is trailing above the dark lunar edge with a spot of light, Jupiter's moon Ganymede, between the lunar limb and the planet's disk. Look closely at Jupiter and you can see yet another Jovian moon, Io, just visible against Jupiter's glare!