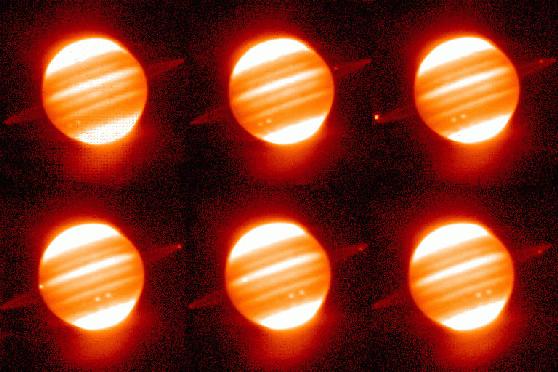 Explanation: Jupiter has rings, too. Unlike Saturn's bright rings which are composed of chunks of ice, Jupiter's rings are darker and appear to consist of fine particles of rock. The six pictures above were taken in infrared light from the Infrared Telescope Facility in Hawaii in 1994, and cover a time span of two hours. Quite visible are Jupiter's rings, bands and spots in the outer atmosphere. Also visible in the photos, however, are two small Jovian moons. Metis, only 40 kilometers across, appears in the second picture as a dim spot on the rings to the right of Jupiter. Amalthea, much larger and brighter, appears in the third frame on the far left, and can be seen to pass across the face of Jupiter in frames four and five. The origin of Jupiter's rings remains unknown, although hypothesized to be created by material scattered from meteorite impacts onto Jupiter's moons.