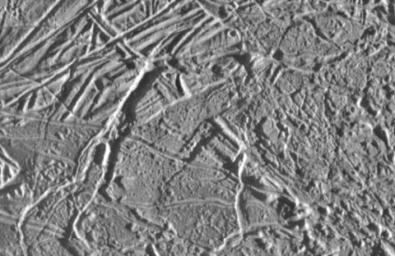 Europa: The Latest From Galileo
Credit: The Galileo Project, JPL, NAS A

Explanation: Today, NASA revealed recent results from the Galileo Probe's December 19th flyby of Europa, Jupiter's ice-covered moon - including this close-up image of fractured and frozen terrrain. The highest resolution picture ever made of Europa, the snapshot shows a complex array of surface features in a 5.9 x 9.9 mile area near the moon's equatorial region. North is toward the top and the Sun illuminates the region from the right. The image was made from a distance of 2,060 miles. At the upper left are linear criss-crossing ridges and grooves probably caused by movements of the surface ice. Serpentine valleys and lumpy features of unknown origins are also visible. Only a few impact craters are apparent though, implying a geologically young surface. So far, Galileo's findings lend support to the exciting possibility that liquid water once existed and may still exist beneath Europa's surface.