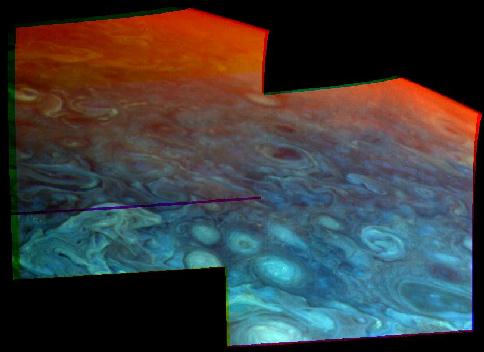 Explanation: A dramatic mosaic of recent images from the Galileo spacecraft reveals details of swirling clouds and a thick stratospheric haze in the atmosphere of Jupiter, the Solar System's largest planet. This false color representation is keyed to altitude - red indicates cloud features near the top of the gas giant's extensive atmosphere while blue corresponds to features at depth. North is up in the mosaic, centered at about 50 degrees northern Jovian latitude, and the limb or edge of the planet arcs across the upper right. The line of sight looking toward the limb emphasizes the high altitude, red haze. What causes the red haze? It may well be created as energetic electrons and other charged particles swept up by Jupiter's magnetosphere are funneled along magnetic field lines and bombard the atmosphere near the polar regions. Charged magnetospheric particles can also create Aurora.