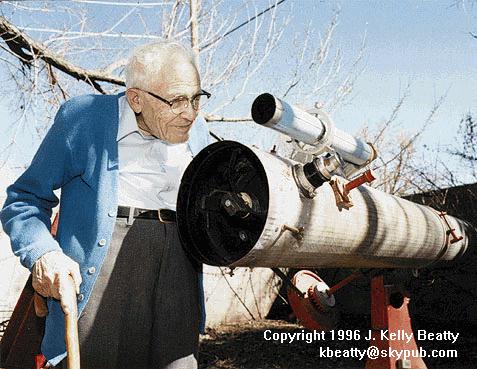 Explanation: Astronomer Clyde Tombaugh, discoverer of Pluto, died on January 17th. Inspiring many during his long and exceptional career, he had been living in Las Cruces, New Mexico with his wife of 60 years, Patsy. Today would have been his 91st birthday. He is pictured above in 1995 in his backyard with a telescope he knew well - a 9 inch Newtonian reflector he built in 1927 with discarded farm machinery and car parts. Using this telescope under the dark night skies of Western Kansas, he made drawings of Mars and Jupiter and submitted them to Lowell Observatory in 1928. Hired to work at Lowell in 1929, Tombaugh embarked on a systematic photographic search for the long sought Planet X with a newly constructed 13 inch astrograph. In 1930 Tombaugh triumphed in his struggle to find the 9th planet, discovering faint and distant Pluto orbiting at the edge of our Solar System. Founding father of New Mexico State University's Astronomy Department, he retired as professor emeritus in 1973 but continued to tour as a lecturer and promoter until failing health prevented it. Always an active stargazer, he was asked by the Smithsonian if they could have the telescope he used to make his 1928 drawings. His response: "I told them I was still using it."