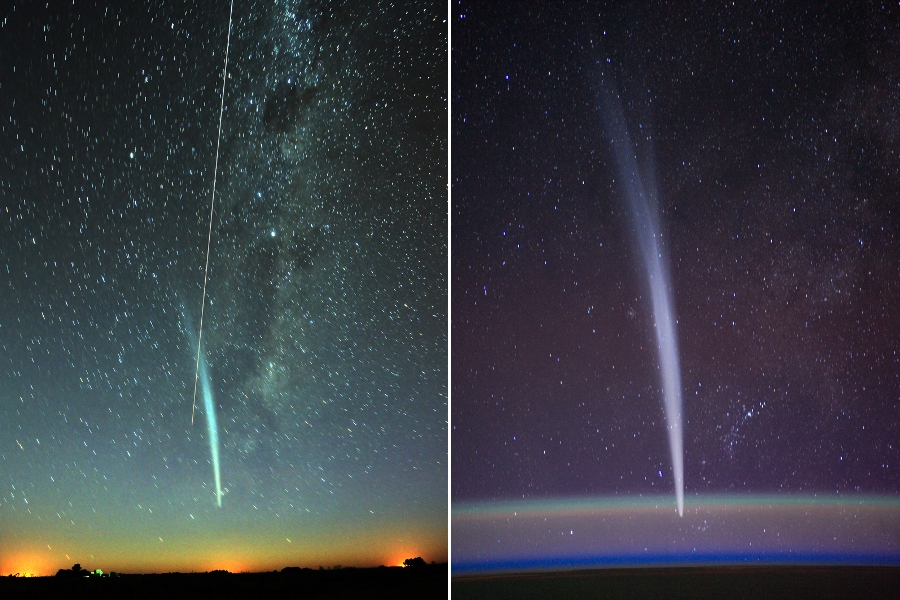 Explanation: On December 24, Comet Lovejoy rose in dawn's twilight, arcing above the eastern horizon, its tails swept back by the solar wind and sunlight. Seen on the left is the comet's early morning appearance alongside the southern Milky Way from the town of Intendente Alvear, La Pampa province, Argentina. The short star trails include bright southern sky stars Alpha and Beta Centauri near the center of the frame, but the long bright streak that crosses the comet tails is a little closer to home. Waiting for the proper moment to start his exposure, the photographer has also caught the International Space Station still glinting in the sunlight as it orbits (top to bottom) above the local horizon. The right panel is the near horizon view of Comet Lovejoy from the space station itself, captured only two days earlier. In fact, Dan Burbank, Expedition 30 commander, recorded Comet Lovejoy rising just before the Sun in a spectacular video (linked here). Even considering the other vistas available from low Earth orbit, Burbank describes the comet as "the most amazing thing I have ever seen in space."