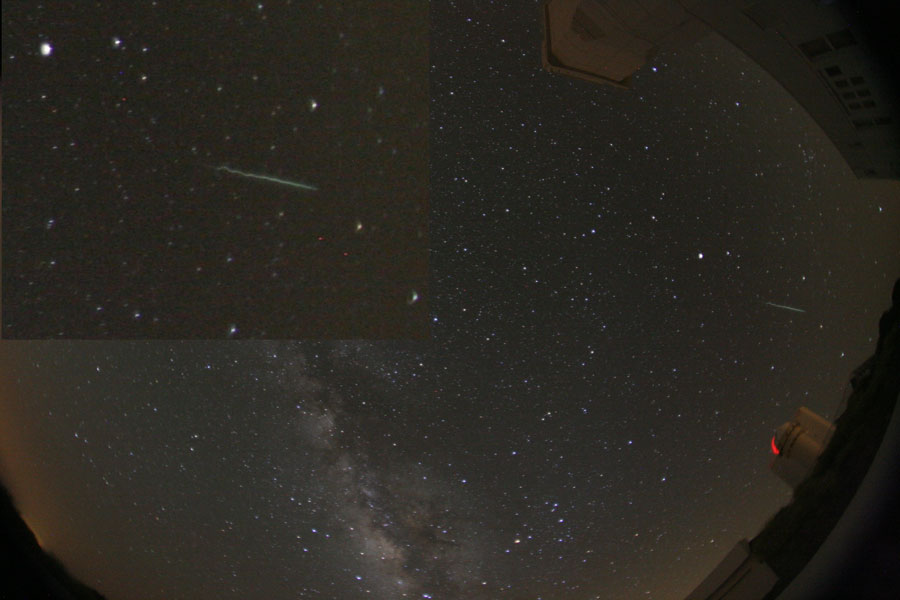 Explanation: Did this meteor take a twisting path? No one is sure. Considered opinions are solicited. Meteors, usually sand sized grains that originate in comets, will typically disintegrate as they enter the Earth's atmosphere. A fast moving meteor ionizes molecules in the Earth's atmosphere that subsequently glow when they reacquire electrons. Meteor paths that twist noticeably have been noted before, and even photographed, but attributing such behavior to the motion of the meteor itself and neither the wind-blown meteor train nor the observer remains somewhat controversial. The above meteor, imaged two weeks ago streaking over the Teide Observatory in Tenerife, Canary Islands, appears to swagger as much as several minutes of arc, which the experienced astrophotographer did not think could be attributed to drifting of the resulting train or motion of the camera mount. If truly an indication of a twisted meteor path, an underlying reason could be the pictured meteor was markedly non-spherical in shape, non-uniform in composition, or electrically charged. Non-uniform meteors, for example, may evaporate more on one side than another, causing a rotating meteor to wobble. Understanding meteors is important partly because meteors are candidates to have seeded Earth with prebiotic molecules that allowed for the development of life.