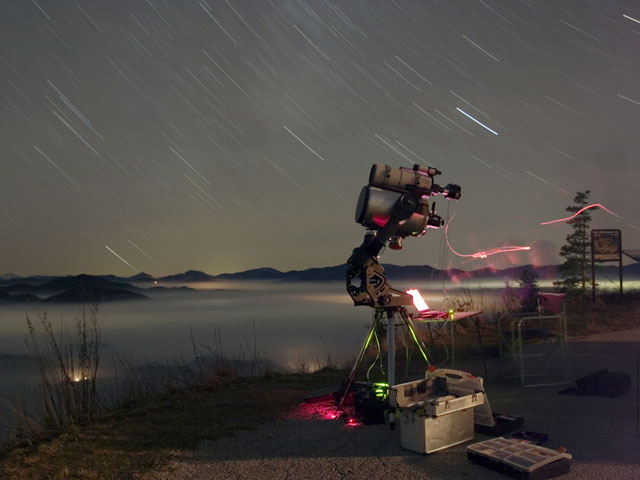 A Window to the Once Secret Sky
Credit & Copyright: Peter Wienerroither (U. Wien)

Explanation: If there were a window nearby to the distant universe -- would you look through it? Quite possibly, there is, in the form of a small telescope. A local skykeeper could be a relative or a stranger and is frequently proud to show off the sky free of charge. Through a window called an eyepiece, on a dark cloudless night, you can see clusters of stars, rings around Saturn, glowing nebulas of gas, craters on the Moon, and galaxies across the universe. The technology to create this window -- and the secret sky it reveals -- was unknown only 400 years ago. Modern sky opportunities may occur this Saturday, Astronomy Day, at local amateur astronomy clubs, universities, science centers, or planetariums. Pictured above is a small telescope being deployed at picturesque Hohe Wand, about 50 kilometers south of Vienna, Austria. The spin of the Earth is visible in the above photo as the long star trails.