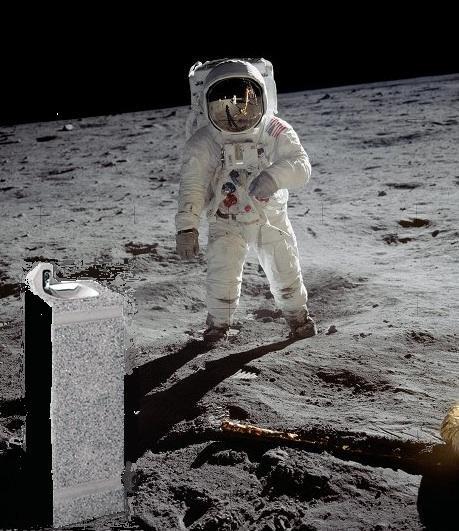 Explanation: In 2009, space missions revealed tantalizing signs of water on or near the lunar surface, once thought of as a dry and desolate environment. But researchers are now offering this archival picture as further evidence that humans might one day be able to use the Moon's newly discovered resource to directly quench their thirst. Found in a pile of old Apollo lunar surface photographs, the picture reveals an object at the far left of the frame that appears to be a drinking fountain, surprisingly close to one of the Lunar Module landing struts. When asked why no mention of the object was in their reports, the astronauts replied that they discovered their spacesuit gloves were too bulky to allow them to activate the fountain, so they had simply ignored it during their stay on the lunar surface. Perhaps not coincidentally, this picture was taken exactly 40 years ago, on April Fools Day ...