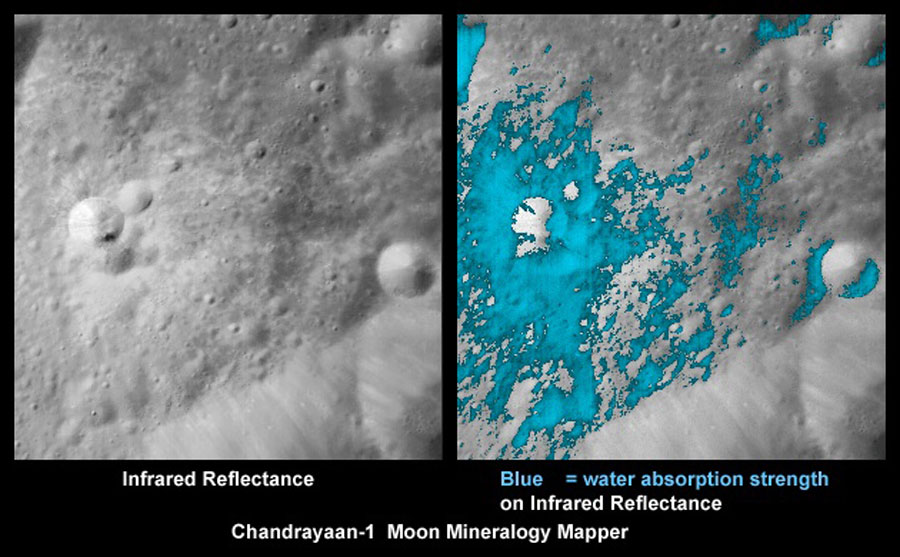 Water Discovered on the Moon
Credit: ISRO/NASA/JPL-Caltech/USGS/Brown U.

Explanation: Water has been discovered on the surface of the Moon. No lakes have been found, but rather NASA's Moon Mineralogy Mapper aboard India's new Chandrayaan-1 lunar orbiter radios back that parts of the Moon's surface absorb a very specific color of light identified previously only with water. Currently, scientists are trying to fit this with other facts about the Moon to figure out how much water is there, and even what form this water takes. Unfortunately, even the dampest scenarios leave our moon dryer than the driest of Earth's deserts. A fascinating clue being debated is whether the water signal rises and falls during a single lunar day. If true, the signal might be explainable by hydrogen flowing out from the Sun and interacting with oxygen in the lunar soil. This could leave an extremely thin monolayer of water, perhaps only a few molecules thick. Some of the resulting water might subsequently evaporate away in bright sunlight. Pictured above, the area near a crater on the far side of the Moon shows a relatively high abundance of water-carrying minerals in false-color blue. Next week, the new LCROSS satellite will release an impactor that will strike a permanently shadowed crater near the lunar south pole to see if any hidden water or ice sprays free there.