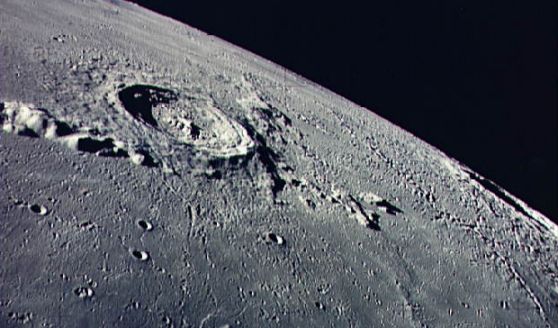 Explanation: This picture, taken as the Apollo 17 astronauts orbited the Moon in 1972, depicts the stark lunar surface around the Eratosthenes and Copernicus craters. Images of a Moon devoid of life are familiar to denizens of the space age. Contrary to this modern perception, life on the Moon was reported in August of 1835 in a series of sensational stories first published by the New York Sun - apparently intended to improve the paper's circulation. These descriptions of lunar life received broad credence and became one of the most spectacular hoaxes in history. Supposedly based on telescopic observations, the stories featured full, lavish accounts of a Moon with oceans and beaches, teeming with plant and animal life and climaxing with reported sightings of winged, furry, human-like creatures resembling bats ! Within a month the trick had been revealed but the newspaper continued to enjoy an increased readership. For now ... have a safe and happy Halloween !