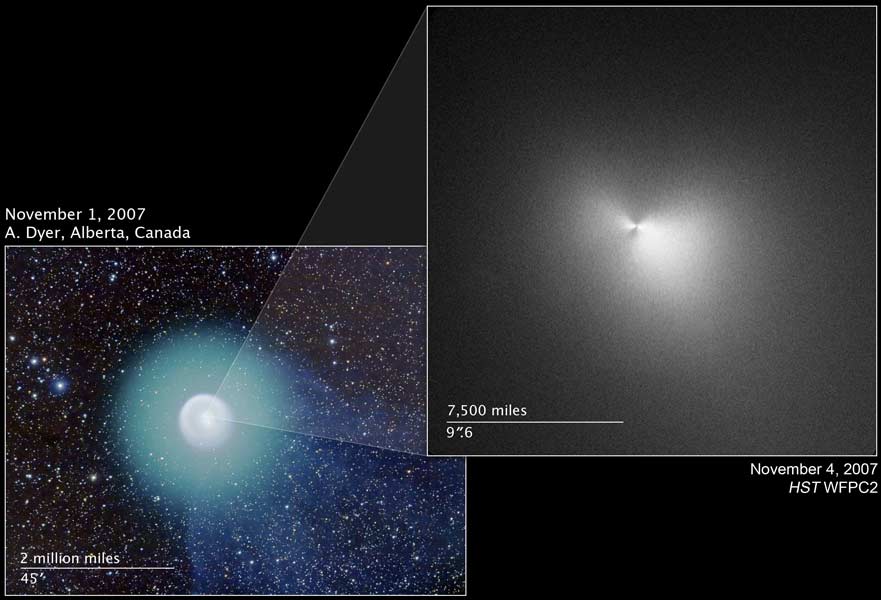 Explanation: Why did Comet Holmes brighten? The unexpectedly bright Comet 17P/Holmes continues to grace northern skies as a naked-eye addition to the constellation Perseus. Any northern sky enthusiast with a dark sky, a bright curiosity, and a recent sky map should still be able to locate the comet in a few minutes. What is seen, however, is primarily the sun-light reflecting dust coma. It surrounds an iceberg nucleus too small and too faint to discern. Clues to the nearly million-fold brightness increase are therefore being sought in dramatic images of the enigmatic comet's central regions taken earlier this month by the Hubble Space Telescope. One such Hubble image, shown above, indicates a still unresolved dense central dust cloud near the nucleus, surrounded by a more complex, anisotropic coma. The Hubble images do not show any obvious fragmentation of the nucleus, however, as was seen last year in Comet Schwassman-Wachmann 3. Observers around and above the world will continue to study this unusual addition to the night sky.