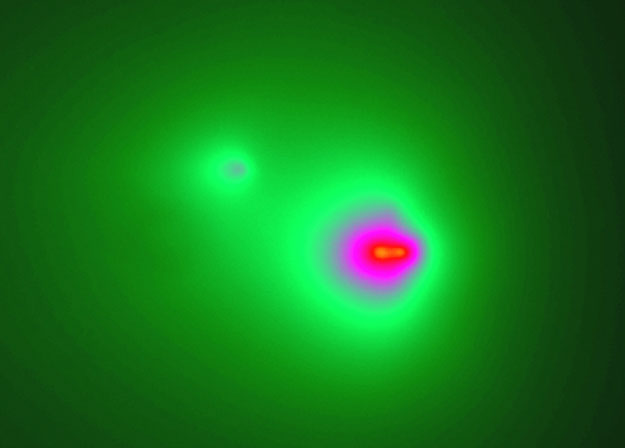 Explanation: Last year, a different comet LINEAR (C/1999 S4) broke up. This year, a comet first imaged by the Lincoln Near Asteroid Research (LINEAR) telescope in New Mexico on 2001 January 3, is also breaking up. This new Comet LINEAR (C/2001 A2) unexpectedly brightened to the edge of naked-eye visiblilty a few weeks ago when its nucleus broke in two. Observations taken just last week now indicate that one of the two remaining nuclear fragments has again fragmented. The first piece to break off is visible on the upper left of the above false-color image by a Very Large Telescope, while additional fragmentation is inferred from the brightness and elongation of the spot on the lower right. When a comet nucleus splits, new surfaces are exposed and previously trapped ice and gas are released that evaporate and brighten in the energetic sunlight. Comet LINEAR may remain visible with little or no optical aid into early June. In contrast, at least two other much dimmer Comet LINEARs discovered recently appear stable.