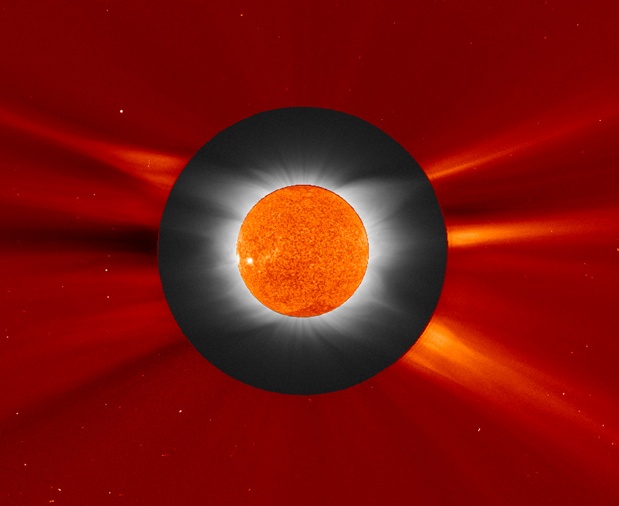 Explanation: Neither rain, nor snow, nor dark of night can keep the space-based SOlar Heliospheric Observatory (SOHO) from watching the Sun. In fact, from its vantage point 1.5 million kilometers sunward of planet Earth, SOHO's cameras can always monitor the Sun's outer atmosphere, or corona. But only during a total solar eclipse can earth-based observers see the lovely coronal streamers and structures - when the Moon briefly blocks the overwhelmingly bright solar surface. In this composite view, SOHO's uninterrupted view of the solar corona above the solar photosphere (center) and corona far beyond the Sun's disk, are shown in orange hues. The middle, donut-shaped region is the corona as recorded by the Williams College Eclipse Expedition to Kastelorizo Island, Greece, headed by Jay Pasachoff, during the March 29th total solar eclipse. Merging ground and space-based views allows astronomers to trace features in the corona that reach from just above the Sun's surface into the solar wind.