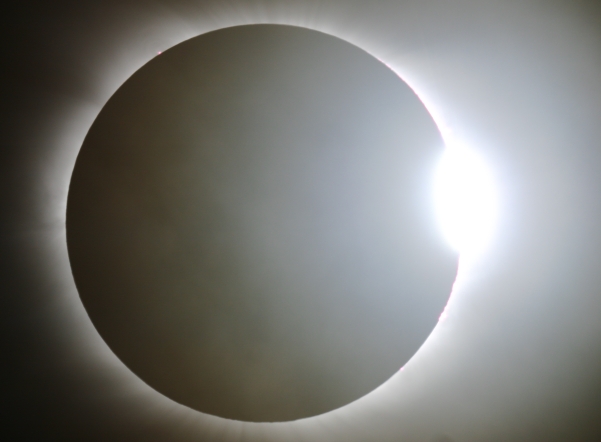 Explanation: The track of totality for the first solar eclipse of 2006 began early yesterday on the east coast of Brazil and ended half a world away at sunset in western Mongolia. In between, the shadow of the Moon crossed the Atlantic Ocean, northern Africa, and central Asia, and so came for a moment to the small Greek island of Kastelorizo in the eastern Aegean. Astronomer Anthony Ayiomamitis reports that the islanders and many eclipse-watching visitors were indeed treated to an inspiring display of the beautiful solar corona as totality lasted about three minutes. As the total phase of the eclipse ended, he was able to capture this striking "diamond ring" image. In it, the first rays of sunlight shining through edge-on lunar valleys create the fleeting appearance of glistening diamonds set in a bright ring around the Moon's silhouette.