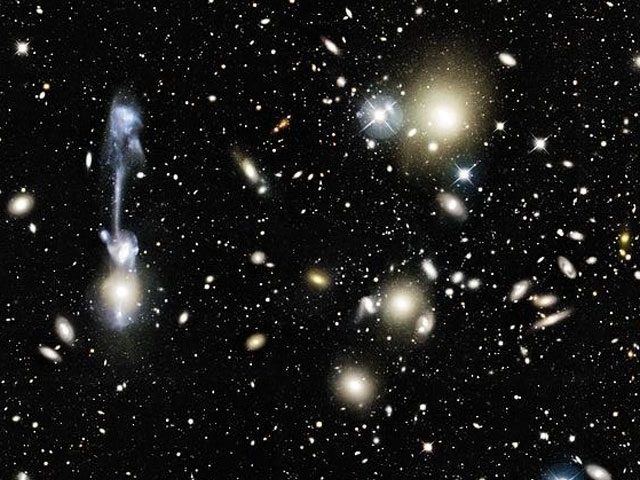 Explanation: What is a guitar doing in a cluster of galaxies? Colliding. Clusters of galaxies are sometimes packed so tight that the galaxies that compose them collide. A prominent example occurs on the left of the above image of the rich cluster of galaxies Abell 1185. There at least two galaxies, cataloged as Arp 105 and dubbed The Guitar for their familiar appearance, are pulling each other apart gravitationally. Most of Abell 1185's hundreds of galaxies are elliptical galaxies, although spiral, lenticular, and irregular galaxies are all clearly evident. Many of the spots on the above image are fully galaxies themselves containing billions of stars, but some spots are foreground stars in our own Milky Way Galaxy. Recent observations of Abell 1185 have found unusual globular clusters of stars that appear to belong only to the galaxy cluster and not to any individual galaxy. Abell 1185 spans about one million light years and lies 400 million light years distant.