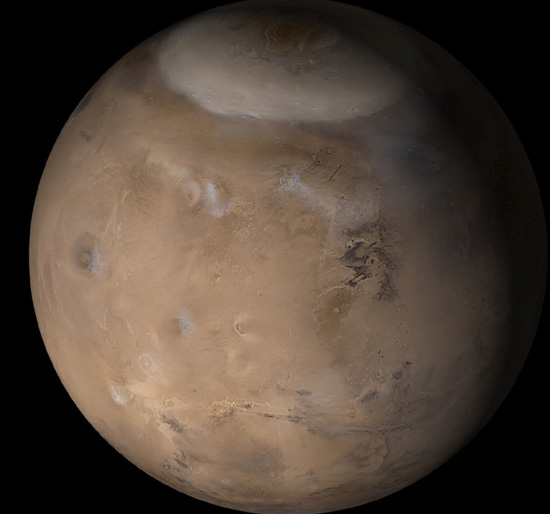 Explanation: Vast canyons, towering volcanoes, sprawling fields of ice, deep craters, and high clouds can all be seen in this image of the Solar System's fourth planet: Mars. The orbiting robot Mars Global Surveyor spacecraft took the above mosaic of images as springtime dawned in Northern Mars in 2002 May. Sprawled across the image bottom is Valles Marinaris, a canyon three times the length of Earth's Grand Canyon, and four times as deep. On the left are several volcanoes including Olympus Mons, a volcano three times higher than Earth's Mt. Everest. At the top is the North Polar Cap made of thawing water and carbon-dioxide based ice. Swirling white clouds and circular impact craters are also visible around Mars. Two rovers will be launched to Mars this summer and should arrive in 2004 January.