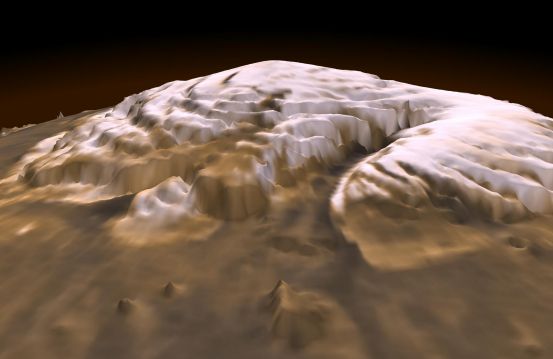 Explanation: This dramatic premier three-dimensional visualization of Mars' north pole is based on elevation measurements made by an orbiting laser. During the Spring and Summer of 1998 the Mars Orbiter Laser Altimeter (MOLA) flashed laser pulses toward the Martian surface from the Global Surveyor spacecraft and recorded the time it took to detect the reflection. This timing data has now been translated to a detailed topographic map of Mars' north polar terrain. The map indicates that the ice cap is is about 1,200 kilometers across, a maximum of 3 kilometers thick, and cut by canyons and troughs up to 1 kilometer deep. The measurements also indicate that the cap is composed primarily of water ice with a total volume of only about four percent of planet Earth's Antarctic ice sheet. In all it represents at most a tenth of the amount of water some scientists believe once existed on ancient Mars. Where did all the water go?