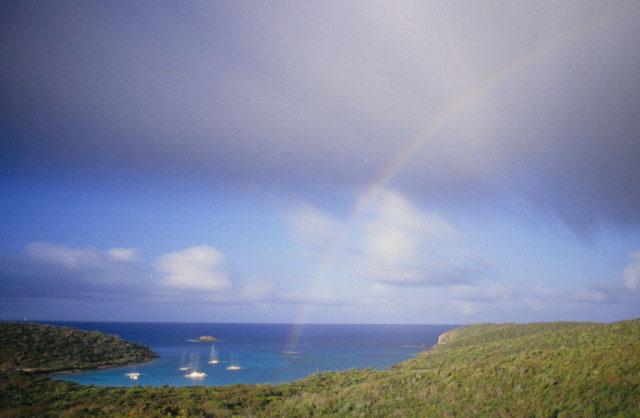 Explanation: Have you ever seen a moonbow? Just as rainbows are lit by the Sun, moonbows are lit by the Moon. Since the Sun is so much brighter than the Moon, sunlit rainbows are much brighter and more commonly seen than moonbows. Pictured above is a moonbow stretching over Salt Pond Bay in St. John, Virgin Islands. Sailboats are visible on the left. To bring out the moonbow, an exposure of 30 seconds was needed, making the picture appear as if it was taken during the day. Since moonlight is itself reflected sunlight, the colors are nearly the same. Both rainbows and moonbows are created by light being scattered inside small water droplets, typically from a nearby rainfall. The raindrops each act as miniature prisms, together creating the picturesque spectrum of colors seen.