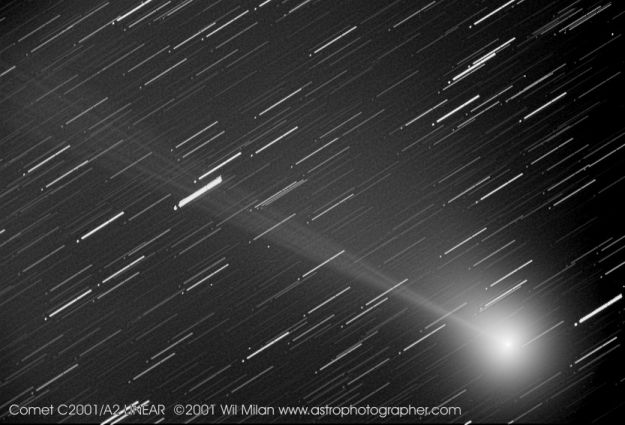 Explanation: Comet C/2001 A2 (LINEAR) has crossed the celestial equator and is heading north. Outward bound, this primordial piece of the solar system is still just visible to the unaided eye and can now be sighted by northern hemisphere skygazers as it moves through the constellation Pisces. This picture of the comet is a combination of 33 individual one minute exposures made on June 30 with a small telescope and digital camera situated in central Arizona, USA. The composite image brings out faint details in the comet's tail which was reported to extend for several degrees, beyond the camera's roughly 2 degree field of view. Closely spaced, the combined exposures were registered on the comet so background stars appear trailed. To produce the "punctuation" at the end of each star trail, two exposures near the end of the sequence were left out. As a result, the final dots nicely reveal the pattern of the background star field.