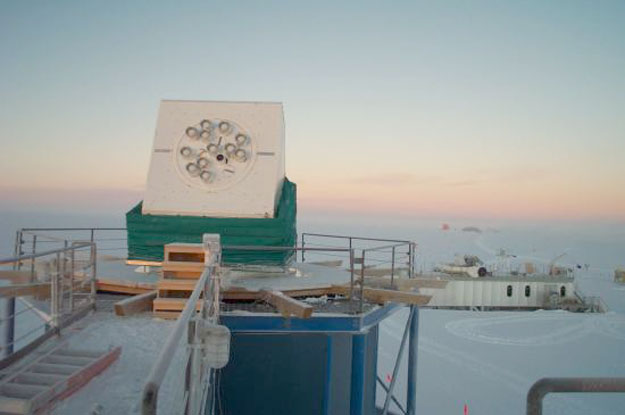 Explanation: On the frozen ice near the bottom of our world, increasingly sophisticated instruments listen for a more precise echo of how our universe started. Sunday, independent collaborations behind three such instruments announced evidence that overtones heard are consistent with our universe having only about five percent normal matter and 95 percent dark matter or dark energy. This amount of normal matter was expected were our universe to have undergone a particularly explosive early phase of the big bang known as inflation. The measurements were actually made on the angular scale of 1/10th degree by detecting slight fluctuations of microwave light that occur in cosmic background radiation. These fluctuations are thought to be caused by sound waves moving through the early universe. Pictured above is the remote receiver for the Degree Angular Scale Interferometer (DASI) that recorded one of the data sets. Similar results were reported Sunday by the BOOMERANG and MAXIMA collaborations.