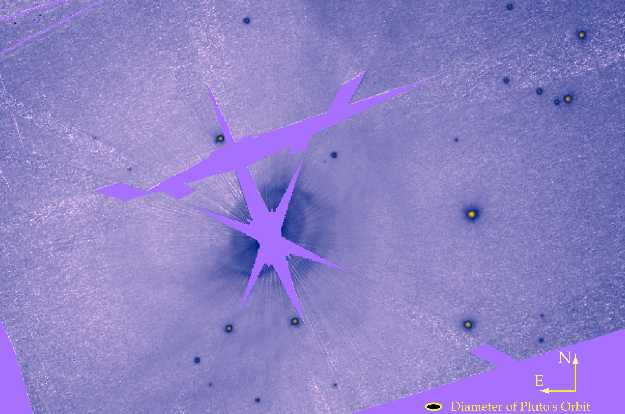 Explanation: More than 100 billion boulders may be swarming in the disk around nearby star HD 100546. In a scene thought similar to the early years of our own Solar System, ever larger rocks are growing by colliding and accreting dust as the messy business of planet formation appears to be underway. For an Earth-like planet in such a hostile environment, the sky would be lit continuously with streaking meteors and the ground would rumble continuously with impacts. Pictured above, the swirling disk of dust, gas, and rocks of HD 100546 is visible as the dark region surrounding the image center. The bright light and six-pointed diffraction spikes from the central star have been removed from the false-color image. HD 100546 is visible with binoculars towards the southern constellation of Musca, and is a relatively nearby 335 light-years away. Similar planet-building systems, dubbed proplyds, have recently been found in Orion, where many emerging planets there must survive the boiling radiations of neighboring bright stars.