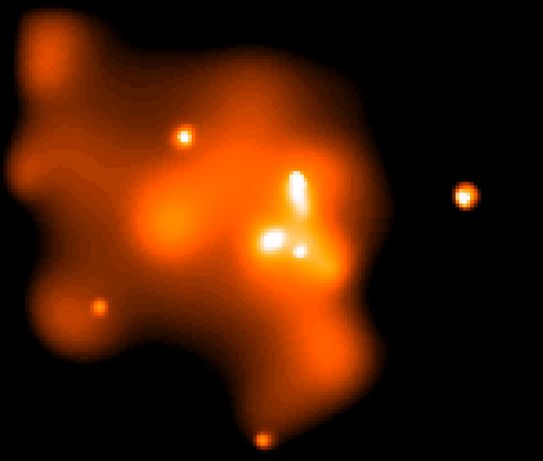 Explanation: Exploring quasars and active galaxies in the distant universe, astronomers have come to believe that most galaxies have massive black holes at their centers. Swirling stars and a strong, variable radio source offer convincing evidence that even our own Milky Way galaxy's center harbors such a bizarre object, a mere 30,000 light-years away. Still, it has long been realized that if a massive black hole lurks there it should produce X-rays - which have not previously been identified. Now, though relatively faint, the missing X-ray source may have been found. Taking advantage of the sensitive Chandra Observatory astronomers have recorded this false-color X-ray image of the Galactic Center. Embedded in a diffuse cloud of X-ray hot gas, the white dot at the center corresponds to an X-ray source at exactly the position of the strong radio source and suspected black hole. Other individual X-ray sources are also present in the picture which spans about 10 light-years at the distance of the galactic center. With radio and X-ray emission generated by infalling material, the Milky Way's central black hole is thought to have a mass of over 2 million suns.