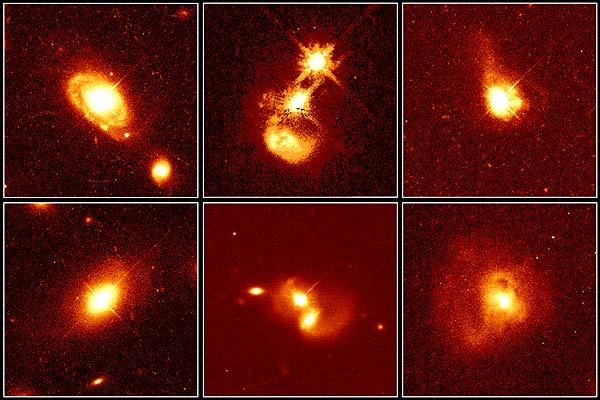 Explanation: QUASARs (QUASi-stellAR objects) lie near the edge of the observable Universe. Discovered in 1963, astronomers were astounded that such objects could be visible across billions of light-years, as this implies they must emit prodigious amounts of energy. Where does the energy come from? Many believe the quasar's central engine is a giant black hole fueled by tremendous amounts of infalling gas, dust, and stars. This gallery of quasar portraits from the Hubble Space Telescope offers a look at their local neighborhoods: the quasars themselves appear as the bright star-like objects with diffraction spikes. The images in the center and right hand columns reveal quasars associated with disrupted colliding and merging galaxies which should provide plenty of debris to feed a hungry black hole.