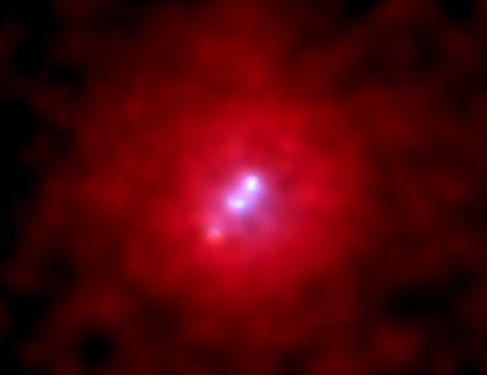 
Explanation: Did this galaxy eat too much? Five billion light-years away, the giant elliptical galaxy 3C295 is a prodigious source of energy at radio wavelengths. Bright knots of X-ray emission are also seen at the center of this false-color Chandra Observatory image of the region. The X-ray and radio emission are believed to be the result of an explosive event triggered when too much material flowed into a supermassive black hole at the heart of the giant galaxy. Additionally, the Chandra picture beautifully reveals an extensive cloud of 50 million degree gas surrounding 3C295. Embedded in the cloud is a cluster of about 100 galaxies, too cool to be seen in the X-ray picture. About two million light-years across, the X-ray hot cloud itself contains enough material to create another 1,000 galaxies or so making the cluster and cloud among the most massive objects in the Universe. However, X-ray data indicate that there is still not enough observed mass to hold the cloud and cluster together gravitationally, suggesting the presence of large amounts of dark matter.