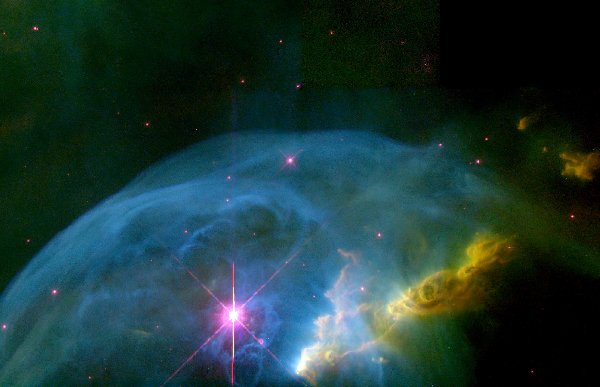 Explanation: What created this huge space bubble? A massive star that is not only bright and blue, but also emitting a fast stellar wind of ionized gas. The Bubble Nebula is actually the smallest of three bubbles surrounding massive star BD+602522, and part of gigantic bubble network S162 created with the help of other massive stars. As fast moving gas expands off BD+602522, it pushes surrounding sparse gas into a shell. The energetic starlight then ionizes the shell, causing it to glow. The above picture taken with the Hubble Space Telescope and released last week shows many details of the Bubble Nebula never seen before and many still not understood. The nebula, also known as NGC 7635, is about six light-years across and visible with a small telescope towards the constellation of Cassiopeia.