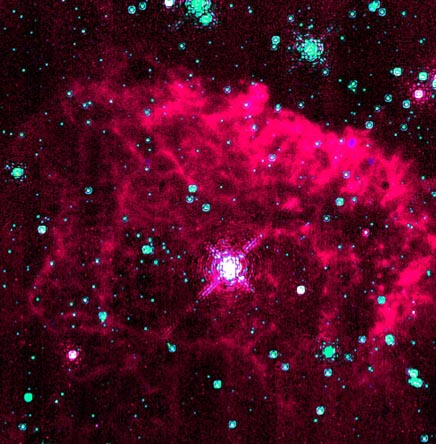 Explanation: Star light, star bright, a new brightest star has been discovered in the night. This new brightest star is so far away and so obscured by dust, however, that it took the Hubble Space Telescope to confirm it. In 1990 a star named the Pistol Star was known to lie at the center of the Pistol Nebula. In 1995 it was suggested that the Pistol Star was so massive it was throwing off the mass that actually created the Pistol Nebula. Now, observations from the Hubble Space Telescope released today confirm the spectral relation between the star and the nebula. Dramatic implications include that the star emits 10 million times more light than our Sun, and is about 100 times more massive. Astronomers are currently unsure how a star this massive could have formed and how it will act in the future.