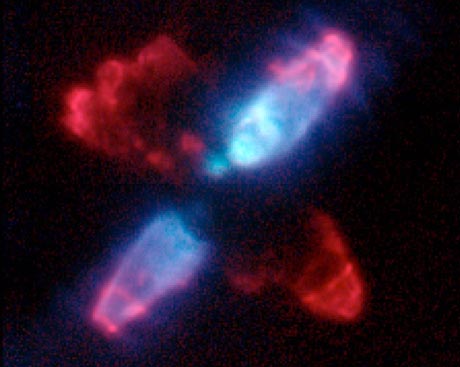 Explanation: The Egg Nebula is taking a beating. Like a baby chick pecking its way out of an egg, the star in the center of the Egg Nebula is casting away shells of gas and dust as it slowly transforms itself into a white dwarf star. The above picture was taken by the newly installed Near Infrared Camera and Multi-Object Spectrometer (NICMOS) now on board the Hubble Space Telescope. A thick torus of dust now surrounds the star through which the shell gas is escaping. Newly expelled gas shells escape in beams as can be seen in the original HST image and in the image shown above. This infrared image is coded in false color to highlight two different types of emission. The red light represents hot hydrogen gas heated by the collisions of expanding shells. The blue light represents light from the central star scattered by the dust in the nebula. It takes light about 3000 years to reach us from the Egg Nebula, which is hundreds of times the size of our Solar System.