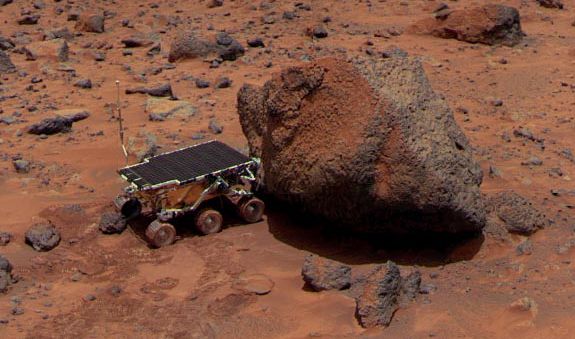 Explanation: This sharp color image featuring Mars rock Yogi and the rolling Sojourner robot shows off Yogi's two-toned surface. Yogi appears to be leaning into the prevailing winds causing some to suggest that its color contrast may be caused by the accumulation of rust colored dust on its windward face. The Pathfinder spacecraft, now the Sagan Memorial Station, has ended the primary mission phase after returning a scientific bonanza from the surface of Mars. The Sojourner robot rolled hundreds of feet on the martian surface, circumnavigated the lander, and produced a wealth of data and images. Mars Pathfinder and Soujourner landed on July 4, 1997 and lasted about 3 months, well beyond their designed lifetime.