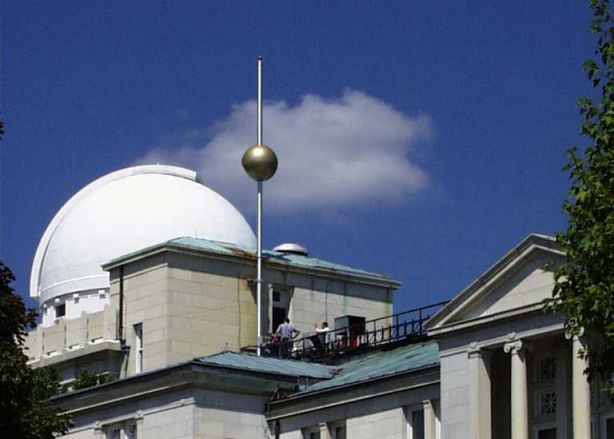 Explanation: In the nineteenth century, dropping a time ball from a prominent location was a practical way of communicating the time to the surrounding country side and ships at sea. Initiating a fledgling time service for the United States, the U.S. Naval Observatory dropped a time ball at precisely noon every day begining in 1845. At the end of the twentieth century, in commemoration of this traditional method of disseminating time, the U.S. Naval Observatory has installed this ceremonial time ball atop its main building in Washington D.C. Dropping this time ball - at midnight Eastern Standard Time on New Year's Eve - will be the local culmination of a "round-the-world time ball drop" marking the beginning of the year 2000 and the beginning of the Third Millennium in 2001. Meanwhile, don't forget ... this year, in most of the U.S. Daylight Time ends at 2:00 am on Sunday, October 31.