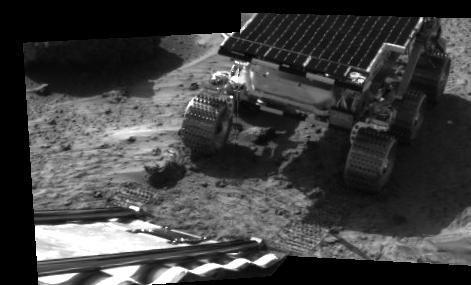 Explanation: The six wheeled robot rover Mars Sojourner rolled onto the martian surface on July 5th (Sol 2) at about 10:40 PM Pacific Daylight Time. This image confirms that its descent down the lander's rear deployment ramp was successful. Click on the image to download a "movie gif" constructed from 9 images taken by the Sagan Memorial Station's IMP camera which shows the rover rolling down the ramp! The rover moved only a short distance from the ramp and spent the night analyzing the martian soil with its Alpha Proton X-Ray Spectrometer. Its next destination will be a tantalizing rock about 1 foot away that scientists have named "Barnacle Bill". A slow but steady off-road vehicle powered by a 1.9 square foot solar array, the rover can negotiate obstacles tilted at a 45 degree angle and travels at less than half an inch per second or nearly 0.03 miles per hour.