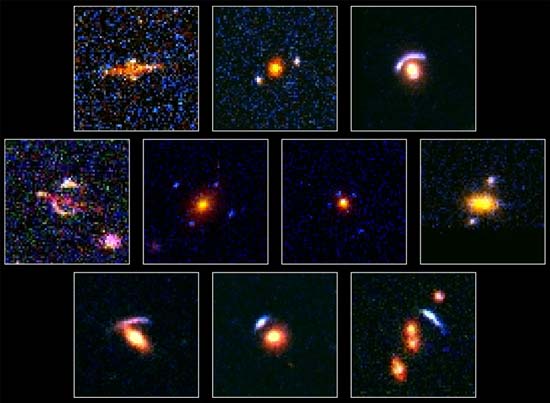 Explanation: The deeper you peer into the universe, the harder it is to see straight. The reason is that distant galaxies act as gravitational lenses, deflecting light that passes nearby. These deflections result in the distortion of background sources, and in some cases the creation of multiple images. Pictured above, candidate artifacts of gravitational lensing have been found in images from the Medium Deep Survey being done with the Hubble Space Telescope. Background source images that are lensed by foreground galaxies include quasars, appearing as multiple blue smudges, and galaxies, distorted into curving arcs. Unusual and interesting candidates for gravitational lensing include an edge-on galaxy disk which might be acting as a lens (upper left) and an image nicknamed London Underground (far left) which could well be the distortion of a background galaxy into an optical Einstein ring.