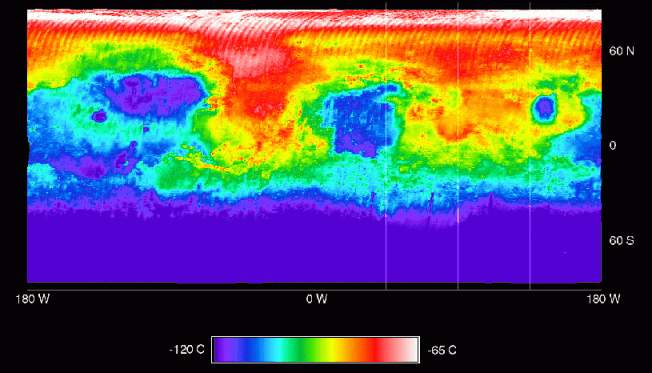 Explanation: It's 2 AM on Mars and surface temperatures range from -65C to -120C, as measured by the Thermal Emission Spectrometer (TES) onboard the Mars Global Surveyor spacecraft. TES data used to make this detailed temperature map were acquired while passing over the night side of the Red Planet during 500 mapping orbits of Mars. With the warmest temperatures shown in white, progressing through red, yellow, and green colors to the coldest temperatures in blue, the map reveals the northern hemisphere during summer while the south experiences the cold martian winter. Near Mars' equator, the variations in nighttime temperatures are related to surface materials. Cold blue areas are covered with fine dust particles and the warmer regions are covered with coarser sand and rocks.