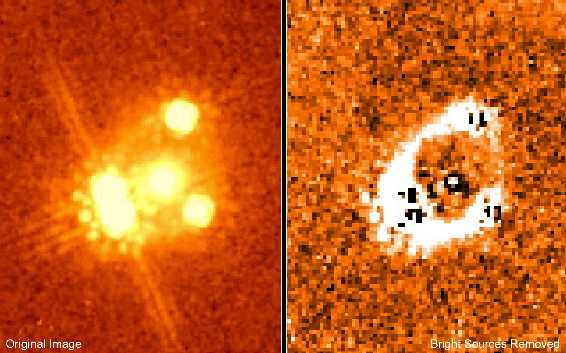 Explanation: In this tangle of quasars and galaxies lies a clue to the expansion rate of the universe. A diffuse glow evident in the picture on the left reveals a normal elliptical galaxy. Directly behind this galaxy lies a normal quasar. Because the quasar is directly behind the galaxy, however, the gravity of the galaxy deflects quasar light like a lens, creating four bright images of the same distant quasar. When these images are all digitally subtracted, a distorted image of the background galaxy that hosts the quasar appears - here shown on the right in ghostly white. Each quasar image traces how the quasar looked at different times in the past, with the time between images influenced by the expansion rate of the universe itself. Assuming dark matter in the elliptical lens galaxy traces the visible matter, this expansion rate can be characterized by a Hubble constant of Ho near 65 km/sec/Mpc, a value close to that determined by other methods. Analysis of this image by itself sheds little light on whether the global geometry of the universe is affected by a cosmological constant.