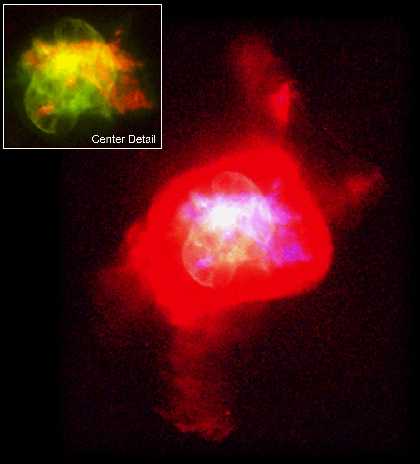 Explanation: A Turtle in Space? Planetary nebula NGC 6210 may look like a giant space turtle, but it is actually much more massive and violent. Fortunately, this gas cloud in Hercules lies about 6500 light years away. NGC 6210 was investigated with the Hubble Space Telescope because it showed evidence of unusual relative abundances of nebular gas. The resulting detailed representative-color picture, above, shows jets of hot gas streaming through holes in an older, cooler shell of gas. The central star that created the planetary nebula is clearly visible in the center of the inset image. Analyses of data involving this recently released picture may help explain the origin of chemical abundances in this nebula and our Galaxy.