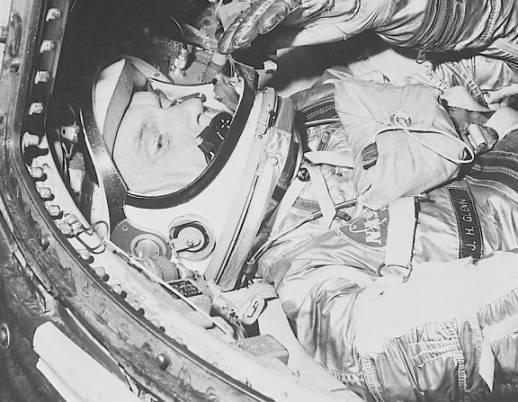 Explanation: Rehearsing for his historic flight on February 20, 1962, Mercury program astronaut John H. Glenn Jr. works in a cramped training capsule preparing for a few hours' voyage through space. Dubbed Friendship 7, his own snug spacecraft was launched by an Atlas rocket and carried Glenn three times around planet Earth at an altitude of about 120 miles, returning him safely to a "splashdown" in the Atlantic Ocean. The first American in orbit, Senator Glenn's remarkable return to space will be 36 years later as a payload specialist on the Space Shuttle Discovery mission STS-95. Discovery is a roomier craft which will carry a crew of 7 and an array of scientific payloads, such as the International Extreme Ultraviolet Hitchhiker. Scheduled for launch today at 2:00 PM Eastern Time, Discovery will orbit at an altitude of 320 miles and land after 8 days at Kennedy Space Center's shuttle landing facility. Godspeed the crew of STS-95 !