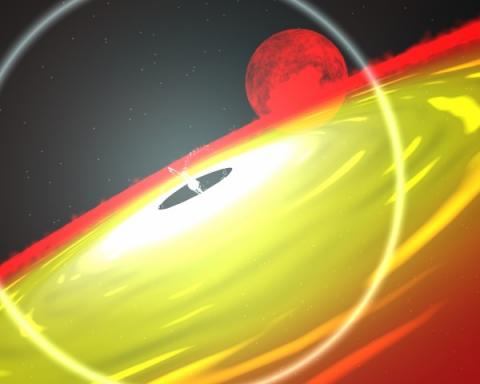 Explanation: This dramatic artist's vision shows a city-sized neutron star centered in a disk of hot plasma drawn from its enfeebled red companion star. Ravenously accreting material from the disk, the neutron star spins faster and faster emitting powerful particle beams and pulses of X-rays as it rotates 400 times a second. Could such a bizarre and inhospitable star system really exist in our Universe? Based on data from the orbiting Rossi X-Ray Timing Explorer (RXTE) satellite, research teams have recently announced a discovery which fits this exotic scenario well - a "millisecond" X-ray pulsar. The newly detected celestial X-ray beacon has the unassuming catalog designation of SAX J1808.4-3658 and is located a comforting 12,000 light years away in the constellation Sagittarius. Its X-ray pulses offer evidence of rapid, accretion powered rotation and provide a much sought after connection between known types of radio and X-ray pulsars and the evolution and ultimate demise of binary star systems.