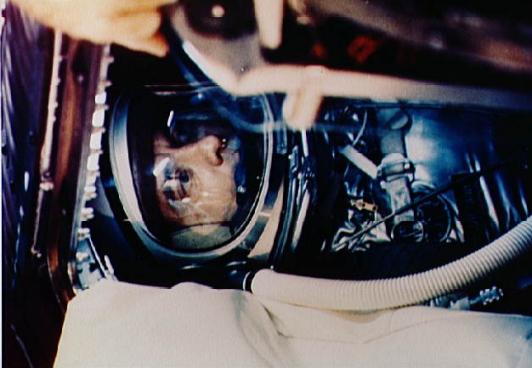 Explanation: On another Friday (May 5, 1961), at the dawn of the space age, NASA controllers "lit the candle" and sent Alan B. Shepard Jr. arcing into space atop a Redstone rocket. The picture shows the pressure-suited Shepard before the launch in his cramped space capsule dubbed "Freedom 7" . This historic flight - the first spaceflight by an American - made Shepard a national hero. Born in East Derry, New Hampshire on November 18, 1923, Shepard graduated from the United States Naval Academy in 1944 and went on to train and serve as a Naval Aviator. Chosen as one of the original seven Mercury Program astronauts, he considered this first flight the greatest challenge and actively sought the assignment. Shepard's accomplishments in his career as an astronaut spanned a remarkable period in human achievement and in 1972 he walked on the moon as commander of the Apollo 14 mission. A true pioneer and intrepid explorer, Alan Shepard died Tuesday at age 74 after a lengthy illness.