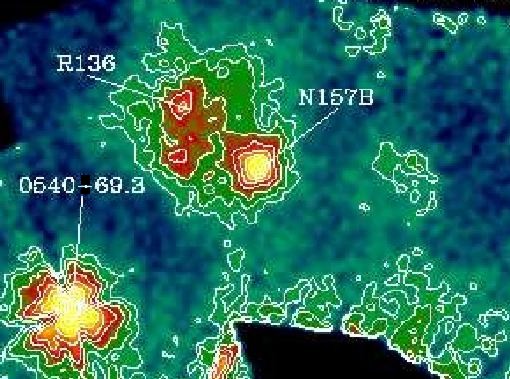 Explanation: Pulsars are rotating neutron stars, born in the violent crucibles of supernova explosions. Like cosmic lighthouses, beams of radiation from surface hotspots sweep past our viewpoint creating pulses which reveal the rotation rates of these incredibly dense stellar corpses. The most famous pulsar of all is found in the nearby supernova remnant, the Crab Nebula. The Crab's young pulsar is fast. Rotating at 33 times a second, its radiation energizes the surrounding gaseous stellar debris. But using archival observations from orbiting X-ray telescopes, astronomers have recently identified another "Crab-like" pulsar that is even faster. Located in the Large Magellanic Cloud (LMC), X-ray pulses from this newly discovered pulsar, in the supernova remnant N157B, indicate an even faster rotation rate - 62 times a second - making it the fastest known pulsar associated with a supernova remnant. This contoured, false color X-ray image of a portion of the LMC shows the location of N157B along with the core of the nearby hot star cluster R136, and the site of another Crab-like pulsar in SNR 0540-69.3 (rotating a mere 20 times a second). The image is about 1,500 light-years across.