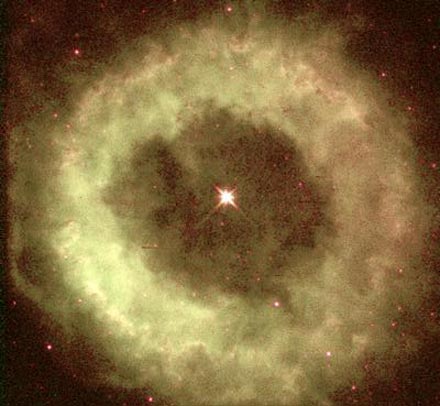 Explanation: Why isn't the star in the center of the nebula? NGC 6369 appears to be a fairly ordinary planetary nebula. It can be seen with a good telescope in the constellation of Ophiuchus. The gas expelled by the central star is bunched in the shape of a donut or cylinder. During the planetary nebula phase, the central star sheds its outer atmosphere as it is evolving to become a white dwarf star. The above image was taken with the Hubble Space Telescope. A closer look at NGC 6369 indicates that the central star is closer to a dimmer edge of the nebula than to the opposing brighter edge.