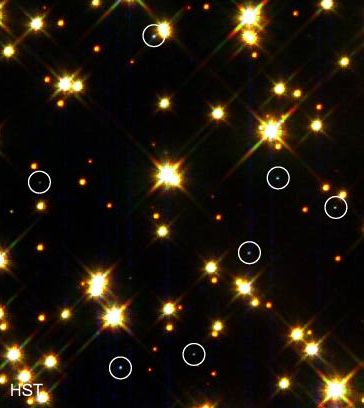 Explanation: Diminutive by stellar standards, white dwarf stars are also intensely hot ... but they are cooling. No longer do their interior nuclear fires burn, so they will continue to cool until they fade away. This Hubble Space Telescope image covers a small region near the center of a globular cluster known as M4. Here, researchers have discovered a large concentration of white dwarf stars (circled above). This was expected - low mass stars, including the Sun, are believed to evolve to the white dwarf stage. Studying how these stars cool could lead to a better understanding of their ages, of the age of their parent globular cluster, and even the age of our universe!