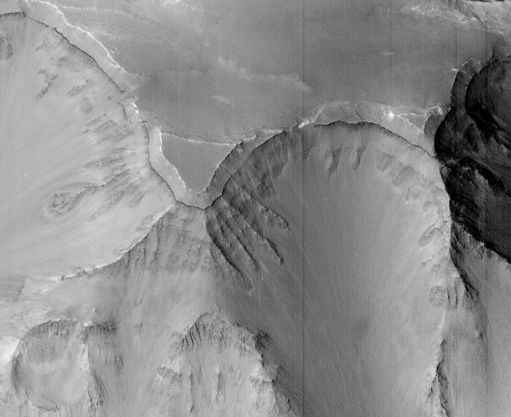 Explanation: In a grand canyon on Mars, steep slopes fall away from a smooth plateau revealing striking layered rock formations. The canyon is part of the Valles Marineris, a 2,500 mile long system of canyons cutting across the Martian equator. This view, recorded on January 1 by the orbiting Mars Global Surveyor shows a small portion of Valles Marineris in amazing detail. The image is about 6 miles wide and high resolution versions show features as small as 20 feet across. What processes caused the layering? In the Grand Canyon on planet Earth, sedimentary processes have resulted in spectacular rock layers. But similar layers of rock in canyons of the Hawaiian Islands were created by volcanoes. Regardless of the origin of layering on Mars, its extent suggests that early Mars was geologically active and complex.