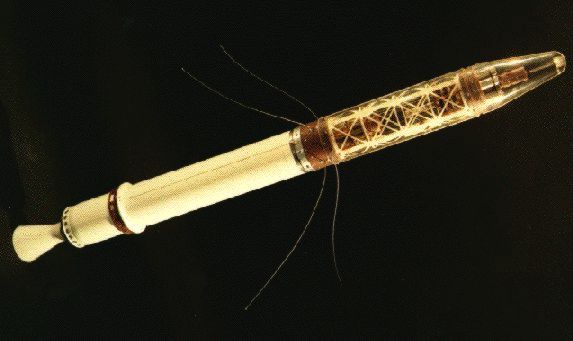 Explanation: Inaugurating the era of space exploration for the US, the First Explorer was launched into Earth orbit forty years ago (February 1, 1958) by the Army Ballistic Missle Agency. The Explorer I satellite weighed about 30 pounds, was 6 feet long, 6 inches in diameter and consisted of batteries, transmitters, and scientific instrumentation built into the fourth stage of a Jupiter-C rocket. Foreshadowing NASA and the adventurous and successful Explorer Program, Explorer I bolstered national prestige in the wake of Sputnik. The satellite also contributed to a spectacular scientific bonanza - the discovery of Earth-girdling belts of magnetically trapped charged particles now known as the Van Allen Radiation Belts.